Can I tell you about my randomly lovely day?
Well, you have no choice. Here we go!

Tomorrow will be the Day O'Cleaning. My apartment has sat dormant and closed up since May and it shows it. I shall clean top to bottom, properly arrange my home and then feel like a normal person again!
Posted by April at 9:38 PM No comments:

Quick little update: I am back home! Things have been crazy and it has only been a day, oy! Good crazy but just trying to organize my life for the next several months and also figuring out budgeting.

-------------------------
On the plane yesterday, there was a serious cast of characters! There were two basketball players that were at least 7' tall. At least. The woman to my left was constantly fiddling with things, looking at her family members a few rows in front of us every few minutes and had almost no concept of personal space. There was a request by the pilot to allow those with connecting flights to get off first while the rest of us remain in our seats. Of course, everyone immediately just got up (including the woman next to me who bolted forward) and once it was our turn, the older gentleman across the aisle from me very loudly yelled for anyone who is connecting to get the hell off the plane now and then proceeded to loudly complain about humanity and the lack of consideration by people. I agreed with him but decided not to loudly join him in protest. For a two hour flight there was a lot going on!
-------------------------
Yesterday was my last day with the O-Team. They randomly came up to my room throughout the morning to say goodbye and I was holding the tears in until two O-Teamers gave me a journal where everyone wrote down things and signed their names. I couldn't even open it because I was already blubbering! I gave lots of hugs as my suite mate, Chelsea, drove me to get lunch and then to the airport. It felt like it was time for me to leave but I definitely wasn't ready to leave the people there.  I had lunch with a few of the office staff and O-Team student coordinators which was a perfect way to end my time there.
-------------------------
Since going to UCF in May, I have developed a weird aversion to melted cheese and tomato-based items. I definitely had some weird eating patterns being that food was often provided for me but I hope that some of my normal eating patterns come back soon. I went to the grocery store last night for a few essentials (peaches, orange juice, eggs, salad) and decided to hold off on buying any of my staples because honestly right now I am not even sure what I want! I also have a crazy aversion to anything sweet the last few days except for soft-serve ice cream. Let's hope that pattern sticks....
--------------------------
I do plan on doing some more interesting posts in the next few weeks once I get the time and the internet connection. I am currently debating on whether to splurge on an internet/cable package that would save me some sanity but also be extra $$$ each month. Decisions, decisions. I have tons of pictures from my last days at UCF, my first helicopter ride, and also some local excursions that will definitely be going on this weekend (farmer's market for the win!).
Posted by April at 2:49 PM 2 comments:

Free Will Astrology Get That Cake

I dreamed you were in a cake store. Every delicious kind of cake you could imagine was there: carrot cake, strawberry cheesecake, gooey butter cake, rich chocolate cake with four layers of cherries and whipped cream, birthday cakes that must have been baked in paradise. Sadly, there was a problem: You weren't allowed to buy anything, even though you had enough money. A big sign on the wall said, simply, "Absolutely no cakes available for Aries." What do you think my dream means? More importantly, what are you going to do about the situation? I suggest that in my next dream, you get a friend to buy a cake for you. Either that, or go to a different cake store. One way or another, the astrological omens say it's high time for you get the cake you want.

Oddly enough, I had a dream about a patisserie earlier this week and shared all of my treats with the other people I was with.
Posted by April at 11:04 AM No comments:

Hi there! I know, I know. It has been quite a while since I updated. Time is flying by far too quickly and I am incredibly sad to say that my time in Florida is almost up. I have a lot of fun things planned with my people here before I leave which I promise to do proper updates of. I went on a solo vacation to Miami, had dinner and dessert with a dear friend I haven't see in eight years AND supported three of my friends doing a Triathlon who have also inspired me and motivated me to get my rear in action. I have lots of things to look forward to back in Michigan but am still too sad to think about leaving this wonderful place and these wonderful people. To that end, I leave you with a picture from brunch at First Watch: 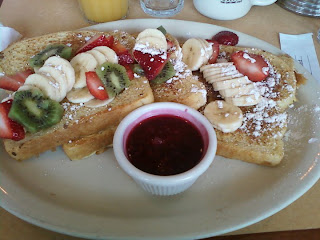 And a picture from lunch yesterday at 4 Rivers: 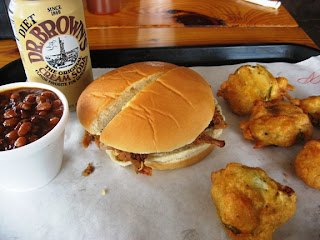 The deliciousness cannot be described. Yum.
Posted by April at 2:22 PM No comments:

Free Will Astrology Heads Up

It's my observation that women find it easier than men to tune into their natural rhythms. The menstrual cycle helps cultivate that ability. We men experience less dramatic physical shifts, and that seems to give us license to override messages from our bodies for the sake of ambition, laziness, or convenience. Having acknowledged that, I must say that I know men who are highly sensitive and responsive to somatic cues, and women who aren't. Whatever gender you are, I believe that in the coming weeks it's crucial for you to be acutely aware of what's going on inside your beloved flesh-and-blood vehicle. This is one time when you need to be intimately aligned with its needs.

I wouldn't be surprised given the lovely orientation diet and my indulgences in Miami over the past week. As much as I absolutely love it here, I am excited to get back home to my normal diet! Now that actual moving of the rear end part.....working on that....
Posted by April at 9:44 PM No comments:

In about six hours I will be off on a fancy bus to Miami. I am nervous and scared out of my mind which is an excellent segway to my Reverb prompt to inspire my July posting!


What new thing will you try this month?
I have traveled a good amount on my own already in life and the beginning of July bring up a new journey: Miami Beach! I originally was going to do a trip down there to visit a friend and decided to just take full advantage of it since I have no idea when I will have the opportunity again. My friend is currently in limbo on her scheduling for next week (she is a nurse) so I know that I will have to just do what I do which is make the best of the situation and plan a few fun activities for myself. I already booked a boat tour of Miami which I am super excited about as well as researched a few "cheap" (for South Beach standards) restaurants that will fulfill all my cravings for brunch, pizza and fresh fruits and vegetables. I also staked out a few ways of sightseeing on my own via the bus and/or renting a bike for the day. I plan to spend at least a good part of one day at the beautiful beaches and ample night time in my room enjoying my cushy bed and cable television. I know...I'm so wild!

My hope within the next month and as I return back to my Michigan life is that I do not lose my zest and willingness to be up for anything. Right now when someone asks if I want to do this or that they want to do that, I am always, always up for it. Already  I have shelled out a good amount of money to go to the Tampa Rays vs. Red Sox baseball game later this month (so very excited!) and might also take a day trip to a beach or St. Augustine. I have a bike tour of Detroit (don't give me that face, it will be amazing!) in August scheduled and paid for and hope to see at least one baseball game with my graduate school people as well.

__________________________
Update on my sugar temptations: I haven't had a treat during work hours for two weeks. I was with a friend last weekend and we shared the most divine Florida Key Lime Cheesecake and I also grabbed some frozen yogurt (my weakness) while I had the car but other than that, there hasn't been any derailments. This obviously will be subject to my cravings and experiences in Miami as I would love to experience the Cuban food as well as the local restaurants.
Posted by April at 8:46 PM No comments: