In Memory: My Mom 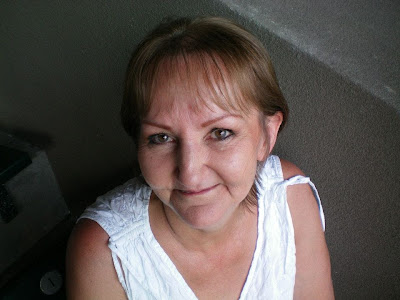 Last week, my mom passed away.

I wanted to write things down mostly for myself, but also to share an experience that, unfortunately, a lot of people have gone through or will go through. In the last year alone, four of my friends have lost their mothers and two have lost their fathers. Despite the relationship at the time, a parent is still a parent and losing one is an unreal feeling. 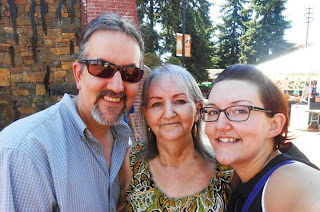 I returned back to the Northwest in May, wanting to be on the West Coast and closer to family. Over the next few weeks, my mom has a series of doctor's appointments but I thought they were preventative and routine. At the end of June after a day out with my brother and I, my mother started crying and said she had to tell us something. She had lung cancer. She also had a mass growing on her neck that was suspicious. We were shocked and unsure of how to react in the moment. 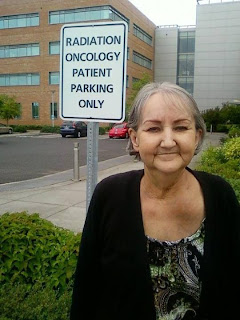 Within the next week, my mom fractured her collarbone. This meant that she was unable to work and because of the mass on her neck, it also meant that her collarbone would take even longer to heal. She was given Vicodin and told to follow up with her doctor. After meeting with her doctor, who is amazing, we were referred to a medical oncologist. I learned a lot about the terminology surrounding cancer treatment and did research to understand what was about to happen. We met with two medical oncologists (those that treat cancer medically), neither of who impressed us. In one of the appointments, we were shown the brain scan. In this scan, we saw numerous brain lesions which meant that the cancer had spread. My mother declined to do a full body scan. We were told to start radiation immediately as my mom did not want to do chemotherapy. Her radiation oncologist (those that treat cancer with radiation) was comforting, concise, and his staff truly helped us get through everything. He clearly explained where the cancer was and also some of the risks in treating so many areas in the body. The cancer was not just in the left lung as we previously thought but it was also spotted in the middle area and on the right lung. The "thing" with radiation is that it is meant to shrink the cancer, if possible, but also damages the area so that it may not function properly. We watched her breathing closely as well as her brain function. She never had symptoms of brain cancer such as headaches, dizziness, or slurred speech. 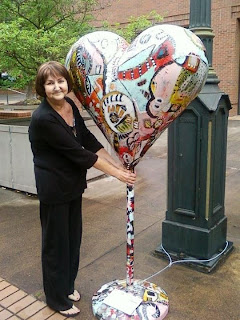 Over the next month and a half, we did daily radiation treatments and also ran through Burgerville for fatty milkshakes. My mother was unable to taste very much, partly due to her smoking for so many years and how it affected her taste buds, and she lost weight quickly. We tried muscle building drinks and nutritional supplements but those milkshakes were the one consistent thing she could get down. As her weight dropped, her energy and strength also decreased rapidly. Her doctor heavily emphasized the need to gain weight in order to continue treatments, however it was incredibly difficult for her.

Throughout this experience, we talked about what she wanted and if she would like to move to California to be with her sisters. After she was injured, we made the plan that upon completing radiation, my brother and I would move her to California to live in a little house behind my aunt's house. The house had everything she could want: small yard, washer & dryer, two bedrooms, and it was quiet (her apartment at the time was ridiculously loud). It seemed like a wonderful idea because she could have her own space and also have support from her sisters, who she missed so dearly. I did what I do best: plan, plan, and plan. 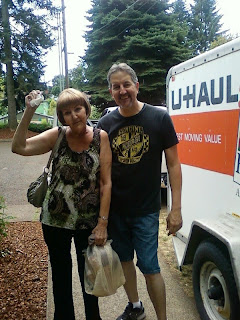 We completed the radiation treatments, mom got a snazzy new wig, and everything was packed up. She was excited. On a Friday morning, we packed everything and my brother and mom set off for California. After a long drive, they arrived in Chico early Saturday morning. My brother stayed for over a week, unpacking everything we had just packed, getting mom settled in, and helping her set up the cable and a bank account. The sisters ate meals with her and the many, many nieces and nephews came over to visit.

Physically, my mom's condition went downhill quickly over the next week. She was refusing any food and her breathing became more shallow and labored. I was able to speak with her on the phone a few times, only able to make out a few whispering words. She got her internet set up and I hoped we could communicate over Google chat to make things easier. Last Saturday, my aunt took her to the ER. 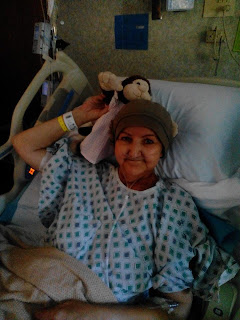 I was told on Monday that she was in the hospital. That night, I was able to talk to her and was so very happy that she not only had a voice but was also coherent. She told me everything that had happened and I updated her on my life. It was like a normal conversation that we would have had only a few months ago. It was such a blessing that I got to talk to her. I made a date to call her again the next day and hoped for the best. Later I learned that she was laughing and also took pictures with a stuffed monkey that my aunt had gotten her. The next day, she became unresponsive and could not manage to talk.

Wednesday, I got a phone call that I needed to come down right away. My brother had just returned the day before from the California trip, having visited friends for a few days in Medford, and was in the middle of doing laundry. Within the next hour, we were on the road. We arrived at the hospital at 9pm and I sent my brother and aunt home to get rest after a quick visit. I felt shaky and out of place in the hospital room. It felt like I was in a movie or an episode of "Grey's Anatomy." It didn't feel real. My mother was on oxygen and looked as though she was just sleeping. She had her little hat on and her skin looked great - she even had her eyebrows on, which I knew she would appreciate. I talked to my mom as though she could hear me, updating her on life, how my brother was doing, and how I hoped it was the right thing moving her down here. Around 2am, I brushed my teeth and curled up in the chair next to her, falling asleep within minutes. At 4:20am, I woke up to the nurse telling me that she was gone. She passed peacefully. 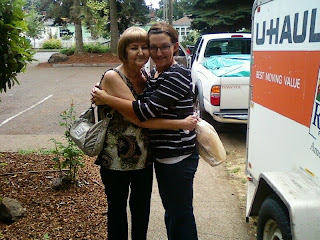 I called my brother and my aunt. I sat there alone for a while, not sure what to do or how to feel. My brother came and I gave him time to grieve alone. While in the restroom, I looked at myself in the mirror and saw an adult. It was startling to see that face of experience and exhaustion coming from me.

My brother and I left the hospital and returned to my mom's house that she had only been in for a little over a week. We weren't sure what to do so we started going through things and packing, yet again. I began going through her closet and it was the hardest thing to do. We had bought dresses only a few days before she left that she wanted to wear in the hot California weather, still with tags on them. There were shirts, jewelry, shoes, and pajamas that she wouldn't wear again. Her wig sat on the mannequin head that we were lucky to get for free from the cancer center in Portland. These were just things, material possessions, but all held the reality that she wasn't there anymore. My brother had so perfectly unpacked her things and set up the whole house as she would have liked, but she barely got a chance to enjoy it. She didn't sleep in her bed because it was too difficult to breathe there. She didn't cook in her kitchen or make coffee. She didn't get to bleach her whites in the washing machine. There were no pictures on the wall.

Sometime that morning we went to the mortuary to make arrangements. My brother and I went to get lunch and then came back to nap. The exhaustion hit us both and that coupled with the emotion, we slept well into the early evening, waking up in time for dinner with my aunt and her family. 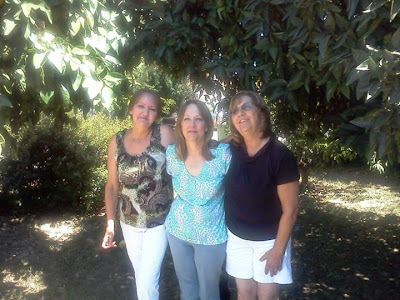 The next day was filled with calling every company, bank, and the like to ask about protocol for "when a loved one dies." I answered the texts, Facebook messages, and emails that had been piling up and my brother and I finished packing the house. We spent time with one aunt and her family for the afternoon and then had dinner with another aunt later that night. For my brother and I, we were not used to so much family time but greatly appreciated the love and support that we received. We said goodbye to those that had been truly heroic in those last few days of my mother's life and the days following her death, and tried to get sleep before the long drive back home. 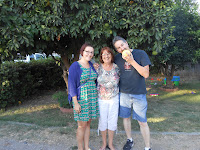 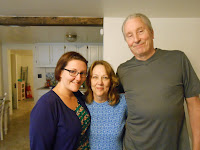 ---------------------------------
And now, we attempt to return to our normal lives. The routine of getting dressed and eating still feels a bit shallow and ridiculous in comparison to what happened only a few days ago. I have told many people that the grief comes in waves: random times that I realize I can't call my mom or that she won't get to experience something.

Many people were shocked by my mother's passing. My mother wanted to keep her illness quiet, sharing only with a few people, and hoped to have more time left. Within the span of three months, she was diagnosed, received radiation, grew weaker, and then passed away. It all happened so quickly, which in some ways was a blessing because she didn't have to be in pain and agony for very long, but it also did not give us time to prepare. I planned to visit in October for a long weekend and already knew that I would be spending the Christmas holiday down there with family. I planned to set up Skype so that we could communicate face-to-face, and we had started the Social Security paperwork for retirement benefits. It all happened so quickly.

I wanted to write this remember my mom and to remind myself of the good fortune I had to talk with her days before her passing. I wanted to write this to process everything "out loud" so that it wasn't all left in my head, replaying like a bad scene from some crappy television show. I wanted to remind myself that despite what happened, I did the best that I could with the time that we did have and that I will always be able to talk to her. I was blessed to have such a caring, strong, and independent mother who always supported me.

New comments are not allowed.