Ugh, it has been far too long since I updated! I absolutely apologize for that. So much has been going on this past month and it feels like I am in slow motion while the rest of the world moves ahead full force. Luckily,  next week is winter break which means I can get some artsy-fartsy stuff going to break out of my paper writing shell.

I have a few posts lined up but wanted to share some pretty pictures of the snow and the (albeit temporary) sunshine that came about last week! The few days of sun really helped with everyone's attitudes and seeing the grass (brown) for the first time in months was such a treat. Today though, we are back to major snow storm and ice coming in just a few short hours. 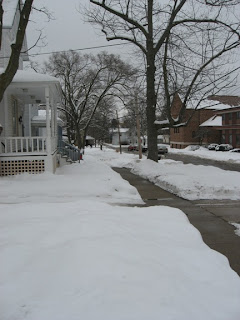 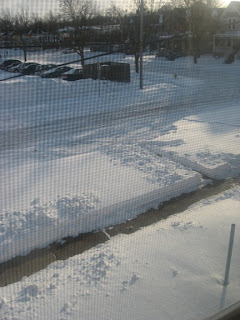 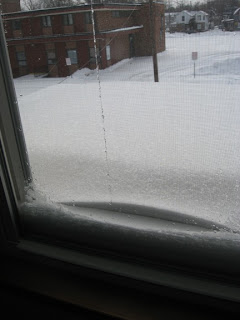 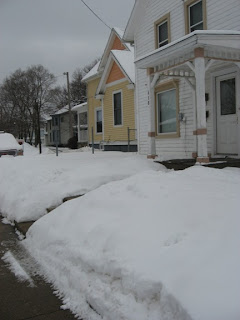 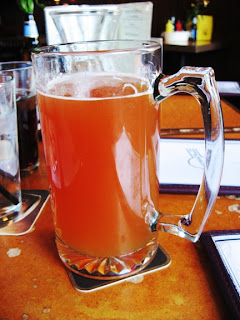 On Friday night, my HESA (Higher Education Student Affairs Program) girls and I went to go see The Rocky Horror Picture Show! Eastern Michigan University was holding performances all weekend long so we grabbed tickets for the 7pm show and hit up dinner before hand at Sidetrack. It was delicious! I was craving some serious meat so I got the burger sliders with feta cheese and roasted red peppers. The fries were average but I stole a mozzarella stick from one of the other girls and those were awesome. Next time I am trying those darned fried pickles! I had the most delicious (and HUGE) beer, something from Michigan with a raspberry taste but I cannot remember the name. Next time I am also going to tackle the huge martini list.

At the show, we could either have a "VIRGIN" or "SLUT" bag. Since I only had two dollars on me, I had to be the virgin for the night but it was still really fun. My bag had a newspaper, water gun, rice and cards. There were scripts handed out to the audience that told when and what to scream and throw. So fun! I had rice in my hair (and shirt) and was slightly damp thanks to the rain scene. If you haven't see the movie yet, I recommend you do! Then go see the live performance with a bunch of crazy people.
Posted by April at 1:38 PM